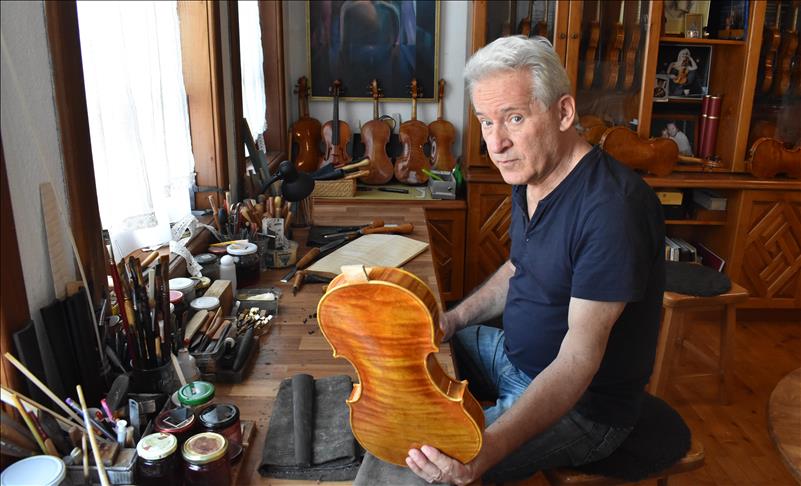 Veles is a city where tradition carries a lot of weight. The cultural expression, more or less, thrives by paying homage to traditional and ethnic elements . Let this attempt of ours, to catalogue Veles handicrafts, be your guide in discovering Veles art through a whole different angle. Some of the stories behind the items, their origin, where can you find them, and even how to buy some.

Embroideries with their beauty and creativity displayed, the skillfulness of mixing colours and techniques, even today, the Macedonian embroideries are considered as one of the most significant ethnological values. The techniques and embroideries developed and cherished throughout Macedonia, also had their followers in the region of Veles. Particularly striking is the Mijaks embroidery, encompassing many traditional elements of the old culture that the Mijaks – from the Mala Reka Region – passed down while populating the villages of Oreše and Papradište, located in the Azot Region in the vicinity of Veles. A specific for the Mijaks embroidery is its colouring with predominantly red color. Black is predominant in the embroideries originating from the Skopska Crna Gora and Dolni Polog. The Macedonian embroidery colourings also include some other colours  – green, yellow and dark blue. Specific for the Macedonian embroideries is the densely embroidered surfaces and the unique ornaments and motifs. The Macedonia embroideries were traditionally made from wool and other naturally coloured strings. In certain regions, as in the Polog and Poreče, the embroideries were also made with gold and silver threads.

Bogdanovski family, the Veles-born academic painter Svetozar Bogdanovski and his family are the only violinmakers in the country and among the few in the Balkans. The Bogdanovskis have been making exceptional violins, and they say that their success is owed to their ideal mixture of painters and musicians. This family is well on its way to compete with world’s greatest violinmakers who had studied making violins. The violins are made from maple and acoustic spruce. The best maple trees for making violins grow in the Balkans, Bosnia in particular. The violinmakers make the bows by themselves with specially prepared essential oils and resins. The Bogdanovskis have so far sold more than 70 violins throughout the world. Their masterpieces of violins are played by both students and professional musicians.

The Pottery carries the spirit of Veles. This traditional craftsmanship that managed to survive through the hardship throughout the centuries has remained to be the city’s symbol. In the past, pottery used to be the practice of the poor families. Kočo Racin, one of the greatest Macedonian poets, was also a potter and considered it to be the oldest art. Pottery making requires special hand-shaping skills and a sense of esthetics. Clay is shaped by hand on a potter’s wheel. Thus made jug and pitcher pottery, pans and pots are left to dry and undergo a firing process in specially designed kilns. At the end, they are ornamented with drawings. Amidst the development of the ceramic industry, the traditional Veles-made pottery is still demanded at the market

Wood carving, the iconostasis at the Ss. Kiril and Metodij Church in Veles with ten meters in length and five meters in height is work of the wood-carver Ljubomir Bisin. His shop was the place where the iconostases in two other churches in Veles were made. Experts say that making iconostases is great honour for every wood-carver, for through them they leave their marks in the time. Ljubomir Bisin has been woodcarving for ten years, investing maximum attention, patience and a lot of love. His hands have produced many decorative carvings and the furniture in the City Hall. Bisin is the Woodcarving Manager at the Papradište Masters Colony from 2005.

Packsaddle Makers, the pasksaddle making is one of the oldest crafts, which is in decline, but not extinct. It can be found mostly in the rural areas, and it will continue to exist until the pack animals are used for weight-bearing. To make packsaddles the craftsmen use wood, jute fabric or aba, tanned sheepskin and straw. The Packsaddles do not use sewing machines or carpenter tools for processing wood, but only adze and special wood-planing knife to plane the wooden parts.

As for buying, aside from visiting online shops, the best option is to actually meet with artists and thus enrich your experience as a whole, while learning a thing or two more about Veles crafts and tradition.